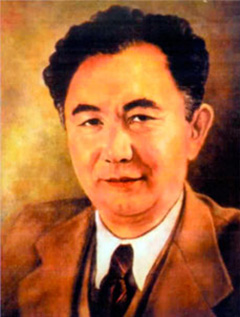 K.I. Satpaev –is one of the greatest people not only of the former Soviet Union, but also of the past century, which his genius, his work practically created and headed the school of geologists of Kazakhstan and has made great influence on the development of geological science.

No one from Kazakhs has yet raised

For such a high level from Kazakhstan

Mikhail Antonovich Usov, who came in 1921 to be treated in Bayanaul affected on boy’s choice of profession. He burned a desire in K.I.Satpayev to explore the bowels of the native land, give them to Motherland and people. Later K.I.Satpayev would write: “I had the great honour to raise the socialist industry…, create advanced science in Kazakhstan.

In 1926 K.I.Satpayev successfully graduated from Tomsk technological institute and became the first Kazakh with diploma of mining engineer-geologist, was sent to the Central Council of national economy.

K.I. Satpayev headed Geological Department of the trust «Atbastsvetmet». Serious problem fell on its share – carrying out of the first stationary prospecting works on a systematic identification of mineral reserves in Zhezkazgan-Ulytau area. Unlike the English and Geological Committee of the CPC, which assessed the reserves of Zhezkazgan as modest, Satpayev was convinced of the enormous reserves of ore in this region.

In 1932 K.I. Satpayev published the first scientific monograph “Jezkazgan copper-ore area and its mineral resources”. By the time it was established, that in the mines of Zhezkazgan more than 2 million tons of copper, and not 60 thousand tons, of which spoke English specialists and staff of the Geological Committee of the SNK. This was proof of the scientific foresight of K.I. Satpaev.

In 1934, at the session of the USSR Academy of Sciences K.I. Satpayev acted with the report «Copper, coal, iron, manganese ore and other minerals Dzhezkazgan-Ulytau district», which fully justified the rich prospects of Zhezkazgan Deposit and the whole region.

In autumn of 1943, for merits in development of science and great scientific achievements K.I.Satpayev was elected a corresponding member of the USSR Academy of Sciences. Those years he devoted special attention to design and construction of Kazakhstan Magnitka, Balkhash and Atasu mining complex.

There were held visiting sessions of Academy of Sciences on initiative of K.I.Satpayev in the largest industrial regions of the republic – Ust-Kamenogorsk, Atyrau, Karaganda, Jezkazgan, Kustanay. There were opened new academic institutes: Nuclear Physics, Mathematics and Mechanics, Hydrogeology and Hydrophysics, Chemistry of oil and natural salts, chemical-metallurgical, mining-metallurgical, Ichthyology and fish industry, Experimental Biology, Economics, Philosophy and Law, Literature and Art, Linguistics. Encyclopedic erudition allowed President to accept personal participation in the creation of these centres of great science. He personally led a comprehensive study of natural resources of the Mangyshlak Peninsula, the research of new deposits of coal, oil, gas, ores of ferrous metallurgy, actively supported construction of the channel Irtysh-Karaganda.

He created and headed school of metallogeny in Kazakhstan. Developed complex approach of formation metallogenic analysis has become fundamental for the geological science and practice.

Protruding scientist of the country, he presented Kazakhstan’s science abroad too. So, in 1947 in membership of delegation of Supreme Council of the USSR he visited England, where worthily represented scientists of the country. As member of Soviet Parliament group was accepted by Winston Churchill, premier-minister of England Ettley. In 1958 K.I.Satpayev in membership of representative delegation was in China, where participation in work of geological conference of PRC. He was awarded with four orders of Lenin and order of the Great Patriotic War, elected as deputy of Supreme Court of the USSR and Kazakh SSR.

Academician K.I. Satpayev died on January 31, 1964, he was buried in Almaty. City in the Karaganda region, Institute of geological Sciences of the Academy of Sciences of Kazakhstan, Zhezkazgan mining and metallurgical complex, a small planet in the constellation of Taurus, the glacier and mountain peak of Jungar Alatau were named after academician K.I.Satpayev,, geologists onamed one of the minerals- Satpayevit, variety of colours. Eight large cities of Kazakhstan, including Semipalatinsk, its streetswere named after academician. Corner of Satpaev created at Museum of Revolution in Moscow, in Tomsk Polytechnic Institute and Institute of Geological Sciences of Academy of Sciences of KazSSR, in the house, where Satpayev lived in Alma-Ata, was established Memorial Board.

At the present time there established award of Academy of Sciences of the RK by his name for outstanding achievements in the field of Natural Sciences, International Fund of K.I. Satpaev was created.

1999 year – was declared as year of Kanysh Satpayev by UNESCO.

Three big things he left after himself: the first – Dzhezkazgan, the second – Academy of Sciences of Kazakhstan, the third – Institute of Geological Sciences. Hundreds of people work and live in all of them, and continue deeds of worthy son of Kazakh people, scientist, geologist K.I. Satpayev.

Years will pass, there will be new scientists, but noble memory of the first Director of the Kazakh Academy of Sciences will remain.

From an interview Of Abylkas Saginovich Saginov to correspondent of the newspaper “Industrial Karaganda” Natalia Rozhkova, 26.12.2005.

“Industrial life taught me a lot. Exactly at that time I firstly met Kanysh Imantayevich Satpayev. He was at mature age. I finished candidate dissertation, there was need in opponent. Defense was held in Alma-Ata. I was advised to apply to Satpayev, nobody except him wouldn’t solve that question. That was how I came to academician and president of AS of Kazakhstan at first time, about whom I knew a lot. In 1951 he was too old.

Kanysh Imantayevich asked me in details where I was born, where studied. When he knew about Dnepropetrovsk, he was surprised “How far you’d gone!”. All questions academician solved without He left the kindest impression on me. He is example indicator of action in a particular situation, example of impact on my civil and professional formation”.