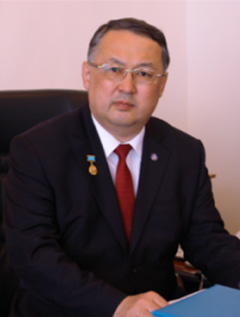 Was born on October 9, 1951 in Karaganda in the family of famous teacher- pedagogue Maulen Gazaliyev- honourary teacher of Kazakhstan, one of the founders and organizers of education system in Karaganda.

In 1968 he graduated from secondary school №1 of Karaganda with high honours of chemical faculty of Kirov KazSU. During students years he took active participation in scientific circles and made speeches with reports. He was Lenin scholarship owner (1971-1973).

During 1973 – 1977 he had studied postgraduate study in Karaganda state university on speciality «02.00.03 – Organic Chemistry». In 1977 he defended his dissertation for academic degree of candidate of chemical sciences. Great influence on young scientists made his first teacher, member-correspondent of NAS RK A.Sh.Shariphkanov.

During 1977 -1979 he had worked as a teacher in Karaganda state university, from 1979 to 1985- associate professor and doctorate student in Karaganda Cooperate institute, from 1985 to 1996 – academic secretary, Head of the laboratory, deputy head of Synthesis and coal industry institute of MES RK. In 1991 he defended doctoral dissertation and received the title professor. In 1994 he was elected as member-correspondent of National Academy of science of the Republic of Kazakhstan.

In 2003 – academician of National academy of Sciences of the Republic of Kazakhstan.

During 1996-1998 he had worked as vice-rector of Buketov Karaganda state university.

From 1998 to 27.04.2006- he had worked as deputy head of Organic synthesis and coal-chemistry of the Republic of Kazakhstan, also at that period he was appointed as vice-rector of Russian- Kazakhstan Modern Humanitarian University.

During 2008 – 2016 – he worked as rector of Karaganda State Technical university.

He is an author of more than 600scientific works, including 9 monographies, 4 books, 2 manuals, 35 author certificates and patents.

7 doctorates and 40 candidate works were defended under guidance of Gazaliyev A.M.

He created scientific school in the sphere of chemistry of natural and nitrogen containing reagents.