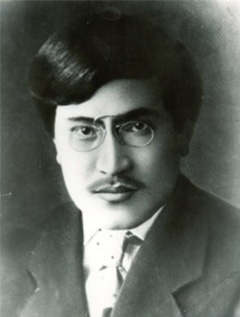 The residents of our city by right can be proud of name of their outstanding compatriot, scientist and statesman, who made a lot into development of the Republic of Kazakhstan, the victim of incalculable disasters on his life path. Few people heard and know about him. Historians kept silent about him. And only mathematics, studying the issues of history of Mathematics, Mathematics education and science in Kazakhstan, often encountered with Yermekov’s surname.

Alimkhan Abeuovich Yermekov was born in 1891 in the town Boriktas of Aktogay area. After successful completion of three-form of Karkaraly municipal specialized school in 1905, he entered Semipalatinsk male high school, from which he graduated in 1912 with a gold medal. Then on competition of certificates was enrolled in Tomsk Institute of Technology, where meeting with G.N.Potanin took place, which left trace on the young man’s soul for life.

In the days of October events in 1917 Alimkhan Yermekov studied on the fifth course. The time of troubles made him to interrupt study.

During December 5-13, 1917 in Orenburg was held All-Kazakhstan Congress of party «Alash»*. Government of «Alash-Orda» was elected on the congress with Head Alikhan Bukeykhanov. Alimkhan Yermekov was also included in the membership of government with other representatives of leading national intelligence. He did everything for his people to freedom and independence with his usual determination. Movement «Alash-Orda» for many years was regarded as counter-revolutionary, and its leaders were persecuted and repressed as enemies of the people.

In 1920 А.Yermekov in the position of a member of KazSSR Centreispolkom went to Moscow, where at the meeting under the chairmanship of Lenin made a report on Kazakhstan’s situation. In the process of intense debate about the borders of the Republic, he managed to secure the return to Kazakhstan of a number of very important areas, which formerly belonged to Russia. There were Korostylevskaya steppe, Semipalatinsk, Akmolinskaya region and the Northern coast of the Caspian sea among them. In our days these areas are of great importance: capital of the Republic – Astana is Akmolinskaya region now, and oil and gas reserves are on the Caspian coast.

In the same year in 1920 Alimkhan Yermekov became Chairman of the Board on the province management, at Central Executive Committee. After graduation from Tomsk Institute of technology,he received diploma of mining engineer and speciality of explorationist.

In 1921, Alimkhan Yermekov opened in Karkaralinsk two-stage school and pedagogical technical school. Future academician of the Academy of Sciences of RK О.Zhautykov, corresponding member of the А.Senbayev, major-General К.Boshayev and many others finished that secondary educational institution.

In 1925, Yermekov was invited to Semipalatinsk and approved as Deputy Chairman of the Committee of Kazakhstan in Orenburg, and at the same time supervised section of the industry.

Since 1926, as one of the few highly qualified specialists he was employed at universities of Tashkent (higher pedagogical institute), then in colleges of Almaty. He worked at Kazakh Pedagogical University, Almaty zoovetinstitute and others in positions of Head of Mathematics Department, had academic rank – Associate Professor.

In 1935, Higher Attestation Committee of the USSR assigned him title of Professor of Mathematics and Theoretical Mechanics. In Almaty mining-metallurgical institute, he was Dean of General technical faculty. At this time, Yermekov engaged with development of the scientific mathematical terminology and creation of textbooks and manuals on Mathematics in Kazakh language. In the autumn, 1937, a wave of repression came to Almaty. There were arrested Ermekov’s friends – Professor Assphendiyarov, composer Zhubanov, Commissar of Education Zhurgenev. Highly erudite specialist, an expert in many European languages, a wonderful teacher of mathematics Yermekov went to Moscow and was sent to the post of Head of Department of Mathematics of Kuibyshev Planning Institute. There he worked until March 1938. But on slander in the same year he was arrested under article 58 and blamed for ten years, but punishment was reduced to six years. In connection with the Great Patriotic War he was kept in the camp for nine years until 1947.

In 1948 there was arrest for ten years again. This was the third wave of arrests. They arrested doctors, artists, writers, and teachers. They were released two years later, after Stalin’s death in 1955. In the certificate №3671 of October 20, 1955 was written that Yermekov was let out and was going to Karaganda. Since 1955 he had worked in Karaganda Polytechnic Institute. In 1958, he had retired.

First Kazakh Professor of Mathematics, who made a great contribution to the development of Kazakhstan, was fully rehabilitated and reinstated in own rights.

In 1998, there was opened monument to countrymen – active leaders of the «Alash-Orda» on the native land of A.Yermekov : Alikhan Bukeykhanov, Alimkhan Ermekov, Zhakyp Akbayev.