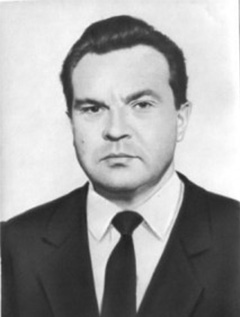 Lazutkin Alexander Grigoryevich was born in 1935 in Penza region.

From 1953 to 1956 he studied in Krivorozhsky Mining Institute. After the end of 3-year courses Lazutkin A.G. transferred to Dnepropetrovsk Mining Institute, he graduated in 1958 on a speciality «Mining engineer». After graduating from DMI was sent to work in the Karaganda. He started his labour activity in 1959, at New-Karaganda machine-building plant. He had worked at machine-building plant worked for 3 years as engineer-designer and Head of Department.

In 1962 he changed to a teaching job in KarPTI as senior teacher.

In 1963 he enrolled in post-graduate education.

In 1967 he defended candidate’s dissertation, continued to work as Candidate of Engineering sciences on “Mining machines” departments.

In 1971 – vice-rector for Scientific work, at the same time head of “Mining machines” department.

In 1980 he received academic degree of Doctor of Engineering sciences.

In 1981 position of professor.

A.G.Lazutkin is an author of 1112 inventions, there published 205 scientific works and 4 monographs on co-authorship.

The main sphere of scientific researches “Improvement of methods extraction of mineral resources”. Member of Republican Council on robotechnics. He had prepared 23 postgraduate students.

In January 25, 1994 he spared on transfer to Muromsk branch of Vladimir polytechnic university.